The guitarist’s ultimate dilemma centers around having a consistent instrument and tone at all times. One of the biggest tools in a musician’s arsenal is their strings. From flatwounds to heavy gauges, musicians are constantly forced to string and re-string their instruments. 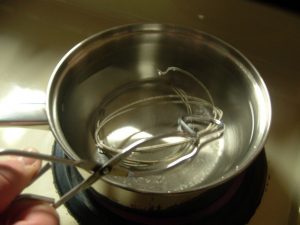 As many musicians and producers know, the sound of fresh strings on your instrument provides an extra layer of tone and resonance that old, dead strings just can’t provide. Now, what if we told you that some musicians, especially bass players, have been taking part in a 4-stringed ritual so strange and old that most kids today would think you were lying.

We are talking about the ancient art of string boiling! You read that right, boiling your strings is an actual thing that many bass players have sworn by for many, many years. As rumor has it, if you take a set of old, tired, dirty strings and drop them into a pot of boiling water, the grease, oil, and grime caked into the crevices will work free, thus restoring life into your strings!

“There are countless stories of bass players leaving their strings on their instruments for years, only to boil them in a pot on the stove! It’s like having brand new strings!”
–Bassist for Doors Tribute Band 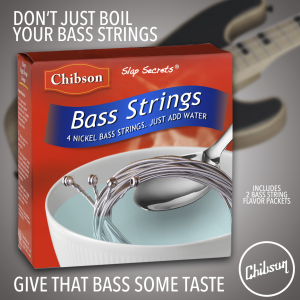 Of course, a lot of kids ask the simple question, “Why not just buy new strings?”

That’s a great question…but most of us don’t have rich parents or a trust fund or have a lawyer in the family that can have court cases dismissed when it involves drinking, minors, and an abandoned car on Route 152 at 3 AM. So, no…we ain’t buying strings anytime soon.

A better question is…why not save the 70 bucks on strings and get some Chibson “Slap Secrets” Bass String season packet?

Chibson’s new flavor packets add some “taste” to your bass playing as well as revitalize your guitar’s strings. Some call it the bass string “fountain of youth” and Chibson USA is laughing all the way to the bank!

So grab some water and start boiling because Chibson’s latest Slap Secret is out!