Chibson USA’s gear expert and YouTube personality, Marky from Gear Dogs, will be returning to the YouTube airwaves with new content and coverage of the recent NAMM 2022 event in Anaheim, CA. With the help of the Chibson team, Marky caught many of the booths at NAMM and will offer a sneak peek of some of the latest guitar innovations to be released so far this year. 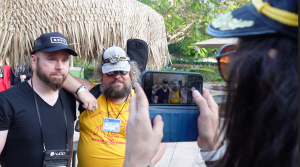 Attending NAMM is nothing new for the Chibson team, and in 2022 the focus was on bringing audiences a different side of Marky. Viewers will see Marky give hard-hitting interviews with some of the industry’s leading guitar makers and follow along in the fun as he experiences his first NAMM, and interacts with spectators and Chibson fans alike who were stoked to finally meet the YouTuber face to face in the real world!

In addition to gear reviews and interviews, Marky was also both witness and participant in the unveiling of Chibson’s latest innovation: The Klontar.

NAMM 2022 was Chibson USA’s exclusive launch of the Klontar, the world’s first instrument that is one part Klon Centaur and one part Guitar. The Chibson team presented the instrument in the Laney Amplification booth while Marky, ever the showman, acted as MC and hype man for the event.

Some called it “genius” and others referred to it as “performance art”, but one thing is certain – the Klontar dazzled NAMM attendees. To demonstrate the Klontar’s incredible sound and effects, Chibson invited the influencer Derek from Masters of Shred, dressed as a Centaur, to wail away while a crowd gathered in awe. What more could one ask for from a Chibson appearance?

We know! More Marky! That is exactly why the Chibson team made sure that Marky had secret access to the Whiskey a Go Go in Hollywood, CA to catch Buckcherry’s sound check and shoot another exciting episode of their new, hot series Chib Checkout, featuring the band’s guitarist, Billy Rowe. It doesn’t get any more rock and roll than this!

Make sure to grab your headlamp because Marky is back! Stay tuned for more episodes on the Chibson USA YouTube channel.

This website uses cookies to improve your experience while you navigate through the website. Out of these, the cookies that are categorized as necessary are stored on your browser as they are essential for the working of basic functionalities of the website. We also use third-party cookies that help us analyze and understand how you use this website. These cookies will be stored in your browser only with your consent. You also have the option to opt-out of these cookies. But opting out of some of these cookies may affect your browsing experience.
Necessary Always Enabled
Necessary cookies are absolutely essential for the website to function properly. These cookies ensure basic functionalities and security features of the website, anonymously.
Functional
Functional cookies help to perform certain functionalities like sharing the content of the website on social media platforms, collect feedbacks, and other third-party features.
Performance
Performance cookies are used to understand and analyze the key performance indexes of the website which helps in delivering a better user experience for the visitors.
Analytics
Analytical cookies are used to understand how visitors interact with the website. These cookies help provide information on metrics the number of visitors, bounce rate, traffic source, etc.
Advertisement
Advertisement cookies are used to provide visitors with relevant ads and marketing campaigns. These cookies track visitors across websites and collect information to provide customized ads.
Others
Other uncategorized cookies are those that are being analyzed and have not been classified into a category as yet.
SAVE & ACCEPT
Go to Top